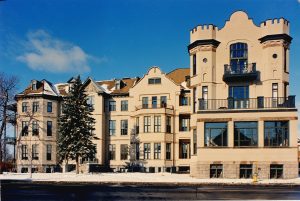 1850 to 1870 was the golden age of Lower Town. Bordered by the Rideau River to the east, Sussex Drive to the west and Rideau Street to the south, the landscape was dominated by the towers of the Basilica.  Lower Town was booming with the construction of residential buildings and shops, and the construction of schools and hospitals followed closely.

Wallis House was built between 1873 and 1875 as an expanded replacement for the smaller Protestant Hospital built in 1851. Wallis House had significantly more capacity for patients and according to death records from the late 1890s, a working morgue was located in the basement.

The hospital was designed by Robert Surtees and was among his last projects before he became the City Engineer for Ottawa. Surtees is known for other contributions to Ottawa, including the Carleton County Courthouse and the Byward Market building.

The building was expanded between 1897 and 1898 to include an additional wing designed by Alexander Hutchison of Montreal. In 1899, to celebrate the 50th anniversary of the hospital’s creation, it was renamed The Carleton County Protestant General Hospital.

In 1924, the Protestant General merged with St. Luke’s Hospital to form the Ottawa Civic Hospital, and moved to Carling Avenue. The building was bought in 1925 by the Catholic Diocese of Ottawa, and served as a seminary until 1943.

The building was bought in 1943 by the Department of National Defence, who maintained ownership until 1990. During this time the building saw many different uses: a barracks for the Women’s Royal Canadian Naval Service, an Emergency Shelter, a Korean War recruiting office, and home to the 28 Ottawa Service Battalion and the 763 Communications Regiment.

With the departure of the military, Wallis House became derelict. Under threat of demolition, Wallis House was purchased by L. A. Sandy Smallwood with the intention of restoring the building and converting it into condominium units. When the units were made available for presale in 1995, all 47 units sold out in less than 24 hours. Today, Wallis House is known as Ottawa’s first condominium loft conversion, and the building that started Ottawa’s condominium market boom.